Posted on January 7, 2013 by theflipflopcontessa

No… seriously… it does.

I’ve had my cute little 1 series for over 3 years while I lived in LA and NEVER had a problem with it. It got me everywhere quickly and in style. It was perfect for me. Then I move to the ‘beautiful San Francisco’ and about 2 months after I start to settle in the attack on my innocent little car begins.  “Leave nothing in your car” was what everyone told me. So I make a point to clean it out every night when I park it in what is a ‘quiet, safe little neighborhood’. One morning I come out to find this happened:

There was an iPod in the secret hidden compartment in the center console… how they knew it was there I’ll never know. But they did and they got it. That’s all they got and just shattered that passenger window. I chalked this up to the SF criminal welcoming committee. Fine… the move went smooth something was bound to happen.

Then one morning a couple weeks later I walk out to my ‘safely’ parked car and sorta squint my eyes… must be a funny reflection, right? 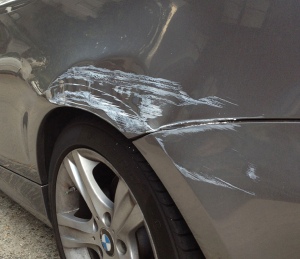 Nope…parked on Grant some delivery truck turned the corner too tight and side swiped it. Didn’t leave a note. Just took off. A lovely neighbor however did witness it and left his # and what he thought to be the license plate he’d tried to grab. Nothing. Cops didn’t find him or didn’t bother and insurance never said a word. Thanks jerk.

Another two weeks go by and there is a TON of construction in my neighborhood. I was warned about being VERY careful where to park, look for the signs, don’t think they won’t ticket you cause parking enforcement is insane around here. Fine. So I take extra care and make sure I’m parked behind the construction zones marked. What happens? Towed. Now I have to contest it because I was parked exactly where other cars were parked prior to and after that one particular Friday that some a-hole decided he wanted more space for his construction. Total B.S. I have pictures… they better give me my $555.50 back.

Another week goes by and after work I have a hair appt in the Alamo Square area. So I park my car in a nice neighborhood spot. 2 lanes, cars parked on either side, under a light, not on a corner and no stop light near. Feeling confident I go relax and get my hair did.

As I walk up to my car chatting with my mother on the cellie… I pause and wonder why my car has been moved about 4-5 feet… now blocking someones driveway and looking a little…ummmm… lopsided. The arrow shows where my car was originally parked.

So I look closer and behind me and see these in the direction of my  little, again, innocent vehicle.

What the F???? What was this person doing and how did they hit my car that badly on a quiet little street? 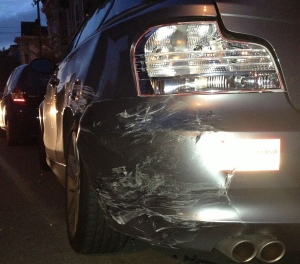 I walk around and to my surprise there is yet another note. This time it said “this will be fully taken care of” and proceeded to leave her information and insurance number. THANK GOODNESS.

Yes, there are good people out there but seriously why does San Francisco hate my car so much? What did it ever do to you?

Long story and far too many  incidents later the result of her hit actually totaled my car. Yep, TOTALED. So you know what I did after I hung the phone with the guy at the garage? I had a long-time coming melt down right there in my office. Embarrassing but shit…moving to a new city and new job was enough stress. The holidays w/o my dad for the 2nd year had me down already… THEN THIS BULLSHIT. I know it’s a car. It’s just a thing. Neither myself nor my dog were in the car. Super thankful. But what a pain in the ass. So I say meltdown was well in order. I’m a girl for goodness sake and my emotions got the better of me.

Now I’m waiting to see what the poor gal was worth and what I do next. Get a lower end, USED small car and pay for a garage to park it in.

I want a car. I love to drive and I travel out of the city almost every weekend. It’s my reality and I’m ok with that. I just need something that can take a bit more of a beating. This post was more of a rant and a warning to those who move here with nice cars. Make sure you have a safe place to park it. SF hates new cars apparently.

This entry was posted in san francisco and tagged cars, parking in SF. Bookmark the permalink.